50 Ways to Kill Your Mammy S2E1: Prison Dancing and Snake Massages in the Philippines 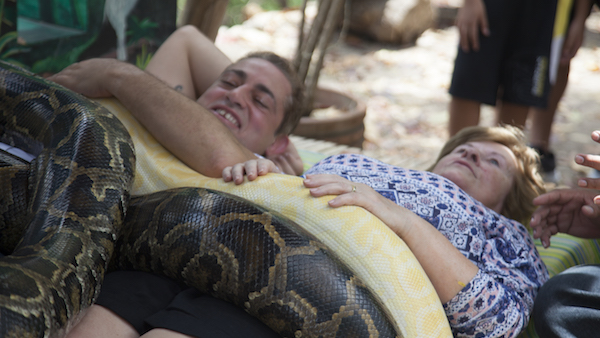 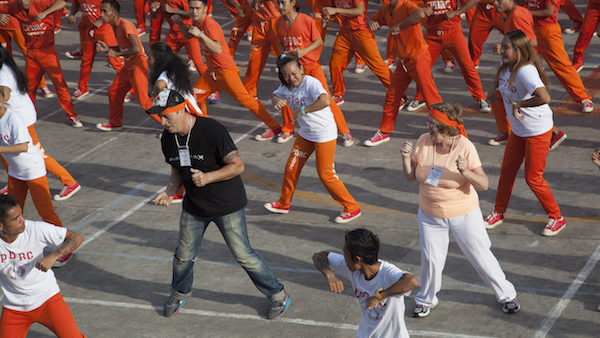 If there is one thing Nancy proved to us in season one of “50 Ways to Kill Your Mammy,” it’s that while she may start out being afraid of a challenge, she’ll eventually pull up her boots and get it done.

Entering into their second adventurous trek around the world, Baz and Nancy fly to the Philippines to see if the tough-task-taking Mammy still has a sizeable brave streak to her. The first stop is Cebu City and a maximum-security prison that houses upwards of 2,000 inmates. If Nancy thought Baz would take it easy on her this time around, she was clearly mistaken.

Housed in this correctional facility are men serving life sentences for murder, bank robberies and drug activity. At first, word of this stops Nancy in her tracks. Playing up the danger angle, Baz humourously insists that she remove all jewellery and anything considered too flashy.

Once inside, Nancy and Baz are informed that the inmates run the prison. That’s right, those locked up have their own government, with a very organized power structure. Heading it all is an inmate who has been incarcerated for 15 years. Immediately stunned by how this prison operates, Baz and Nancy get antsy. Oddly enough, though, Nancy’s comfort level grows and she begins casually conversing with inmates, as Baz continues to be fearful of what’s ahead of them.

Nancy, like any great mother, acts like an understanding parental figure to those in need of some guidance. Dolling out advice, Nancy doesn’t appear the slightest bit phased by the fact that she is about to participate in a synchronized dance with 700 inmates, in a prison yard. You see, in this jail, such an activity has proved to become quite a form of rehabilitation for those who are locked up.

While Baz would’ve surely liked a more modest entrance into the yard, the two are loudly introduced over the P.A. system before standing side-by-side with the inmates. Then comes the music: “Uptown Funk” by Mark Ronson and Bruno Mars. In unison, Baz, Nancy and those in the prison dance a strong, choreographed routine without a major hitch. Nancy is stunningly thrilled about the experience, while Baz is left to balance his enthusiasm with confusion over the fact that his Mammy somehow went through with such a stunt, so easily.

For day two in Cebu, a nice relaxing massage is on tap…with giant pythons! Even though Baz and Nancy are admitted animal lovers, this activity certainly makes them a little jittery. Together, they lay down on the ground as three big pythons are placed on top of them. From there, they move around, putting pressure on various parts of the body. Surprisingly, again, it is Baz who becomes more nervous about this endeavour than his mother. Somehow, Nancy’s courage is beginning to outweigh his – go figure!

After successfully not being bit and/or eaten by a snake, Baz aims to once again put Nancy’s fear of heights to the test. Yes, she overcame this slightly in season one by flying a warplane and then ziplining in Cambodia, but apparently that wasn’t enough to satisfy Baz. This time around, Nancy will sit with her son on a two-person cart that slides along a rollercoaster track attached to the 38th floor of the Crown Regency Hotel. By flicking a switch on this slow moving, on-the-edge adventure, the cart can shift to a 90-degree angle, thus giving riders the impression that they could fall into the city below. 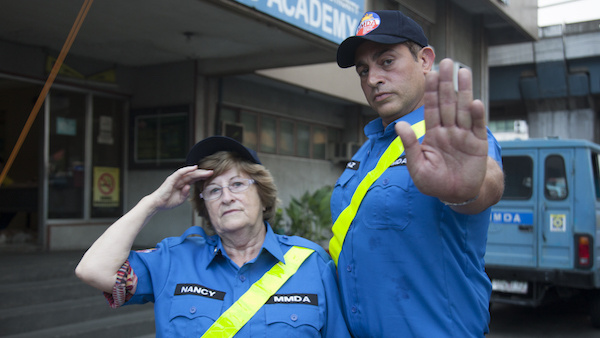 Needless to say, Nancy expects the worst from the get-go. As soon as Baz mentioned the 90-degree angle, Nancy began freaking out and asking a ton of questions to a pair of unsuspecting tourists who just finished the ride. However, Baz manages to guide her into the cart and get the ride moving. As the two move around the circumference of the hotel, Nancy is not enjoying herself. The slow manoeuvring is okay, but once that 90-degree angle happens, Nancy can’t wait for the ride to end. Once it does, Baz is positively beaming that Nancy again stared her fear of heights in the eye.

Following a flight out of Cebu to Manila, Nancy is once again subjected to some scary driving. This time, however, Baz is not behind the wheel. Rather, the duo takes a course on how to direct traffic on dizzyingly busy streets. The traffic is so wild around these parts, more than 2,000 officers are put into the roadways to ensure that order is kept.

Manning the street during rush hour, Baz gets into the spirit of things by dancing around while pointing out where to go. Meanwhile, Nancy won’t let a fellow traffic student leave her side while directing speeding vehicles. Despite massive trepidation, Nancy somehow manages to help this seven-lane intersection maintain some sort of order, without causing a big pile up, or putting herself in harm’s way. 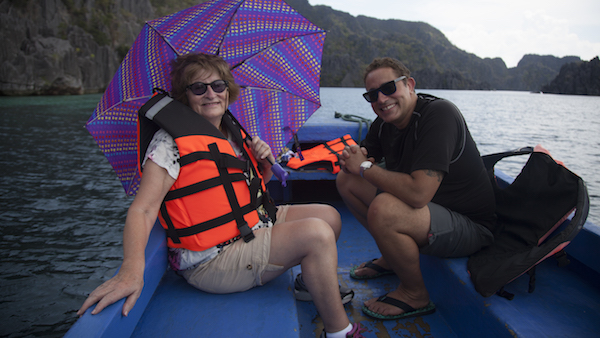 Closing out their time in the Philippines, Baz and Nancy board a seaplane en route to a gorgeous day in a relatively unexplored lagoon. In the co-pilot seat, Nancy is given the opportunity to fly the plane and does so brilliantly! Unlike several other activities, Nancy doesn’t overthink the situation and takes over the controls. Sure, she gets excited and lets the plane dip a little, but what else should you expect from a beginner?

In the water, Baz and Nancy board a bamboo raft and paddle their way through beautiful, peaceful lagoons. It is here where the mother and son continue to see their bond grow in an environment that’s as pristine as you could imagine. Baz reassures Nancy that he will never allow anything bad to happen her on these adventures and reminds her that his intentions are pure.

Then, just as Nancy feels at ease with the day, Baz dives and disappears into the water…for a laugh, of course!

On Monday, October 24 (8pm ET/5pm PT) on “50 Ways to Kill Your Mammy,” Baz and Nancy head to Scandinavia for a chopper ride, a dog-sledding adventure and a visit to Santa’s elf school.