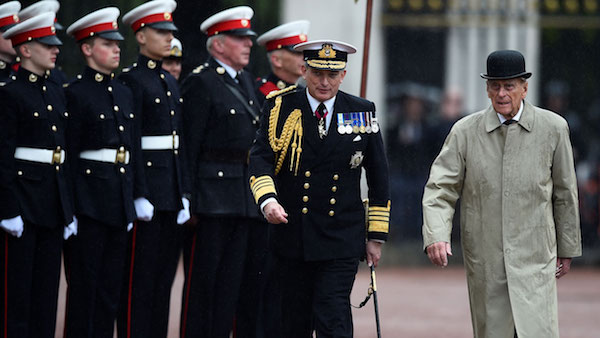 Yesterday (August 2), Prince Philip, the Duke of Edinburgh, participated in his final public engagement. As announced back in May, the Prince “will no longer undertake his own programme of public engagements,” but he can choose to attend certain events with Queen Elizabeth II.

To mark the end of this era, Prince Philip spent part of August 2 attending the Captain General’s Parade at Buckingham Palace. This parade concluded the 1664 Global Challenge, an initiative that raises money and awareness for the Royal Navy Marines charity.

The challenge itself was no small feat this year. In all, Royal Marines from around the U.K. ran 16.64 miles a day for 100 days – 1,664 miles in total. 1664 represents the year this military corps was founded.

While on the scene, the Duke met numerous representatives, including a pair of Royal Marines who completed the 1,664-mile trek. What’s more, he spoke to veterans and cadets before receiving the 1664 Global Challenge baton.

This historical event was documented extensively on Twitter by the Royal Family. You can see some of the highlights below.

For many of the best British TV series of today and yesteryear, turn to VisionTV and its jolly good collection of programming. Click here for more information!

The Duke arrives on the forecourt at Buckingham Palace ready for the @RM1664Challenge Parade. pic.twitter.com/ifVCf75DNz

The @RM1664Challenge has seen 1,500 Royal Marines and Army Commandos, from around the country run 16.64 miles each day for 100 days. pic.twitter.com/Ckw9qbTXzD

Cpl Gingell & Cpl Thompson have both completed the @RM1664Challenge – each running a staggering 16.64 miles per day for 100 days. pic.twitter.com/mmehbeqtCx

The Duke then met veterans and members of the Royal Marine's Association – of which The Duke has been Honorary President since 1948. pic.twitter.com/Ql96VkyjJJ

After three cheers for The Captain General – The Duke of Edinburgh, HRH is handed the @RM1664Challenge baton. pic.twitter.com/EeN9FPe2pE

The Duke of Edinburgh has carried out a total of 22,219 solo engagements and 637 solo overseas visits since 1952. pic.twitter.com/Bqny88YmhD

The Duke of Edinburgh has also authored 14 books and has given 5,496 speeches. pic.twitter.com/iHW8XjucA8